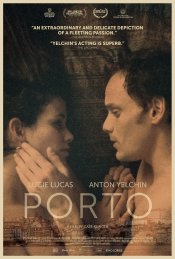 Jake (Anton Yelchin) and Mati (Lucie Lucas) are two expats who experience a brief but intimate connection in the ancient Portuguese city of Porto. He's an American loner exiled from his family. She’s a student from France embroiled in an affair with one of her professors. After spotting each other from a distance at an archeological site and then again at a train station and a café, Jake works up the courage to approach Mati and they embark on a night of carefree intimacy. This romantic encounter is viewed from years later, both characters still haunted by the powerful connection they shared.

Poll: Will you see Porto?

A look at the Porto behind-the-scenes crew and production team.

Production: What we know about Porto

Porto Release Date: When was it released?

Porto was released in 2017 on Friday, November 17, 2017 (New York release). There were 12 other movies released on the same date, including Roman J. Israel, Esq, Wonder and Justice League.

Looking for more information on Porto?