Friendsgiving movie is currently in Completed

April 11, 2020 • Awaiting release by distributor; release date not yet announced. 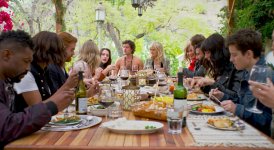 The story concerns a glamorous, newly divorced actor, and her recently-dumped lesbian best friend. Together, along with their motley crew of close friends and strange acquaintances, they host a dysfunctional, comical and chaotic Thanksgiving dinner.

Poll: Will you see Friendsgiving?

Friendsgiving Cast: Who stars in it?

Film Details & Notes: What do we know about Friendsgiving?

A look at the Friendsgiving behind-the-scenes crew and production team.

Production Timeline: When did the Friendsgiving come together?

Friendsgiving Release Date: When is it coming out?

Looking for more information on Friendsgiving?