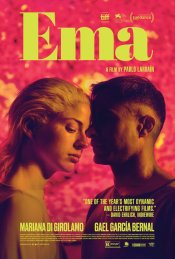 After a shocking incident upends her family life and marriage to a tempestuous choreographer, Ema, a reggaeton dancer, sets out on an odyssey of personal liberation, in this incendiary drama about art, desire, and the modern family from director Pablo Larraín.

Poll: Will you see Ema?

Production: What we know about Ema?

Ema Release Date: When was the film released?


Ema was a Limited release in 2021 on Friday, August 13, 2021. There were 14 other movies released on the same date, including Free Guy, Respect and Don't Breathe 2.
As a Limited release, Ema will only be shown in select movie theaters across major markets. Please check Fandango and Atom Tickets to see if the film is playing in your area.

Looking for more information on Ema?