Ahhh... it's got that new movie smell. 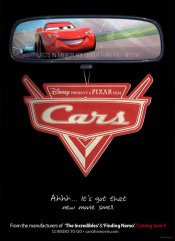 Cars is the saga of Lightning McQueen, a hot-shot animated stock-car voiced by actor Owen Wilson. In route to a big race, the cocky McQueen gets waylaid in Radiator Springs, where he finds the true meaning of friendship and family.

Poll: Will you see Cars?

"Madison" , "For Your Consideration"

Production: What we know about Cars?

Cars Release Date: When was the film released?

Cars was released in 2006 on Friday, June 9, 2006 (). There were 4 other movies released on the same date, including A Prairie Home Companion, Mary and Only Human.

Looking for more information on Cars?