Set in a dystopian world where all living creatures can hear each other’s thoughts. 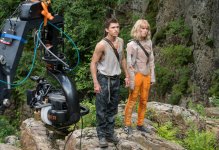 Only young Todd Hewitt (Holland) holds the key to stopping planet-wide destruction. As he flees with his dog in hand, he stumbles upon a strange and silent girl, Viola (Ridley). They soon set off on a white-knuckle adventure into the depths of unexplored New World to find a way for Viola to contact her people on a distant spaceship and Todd begins to realize that he must unlearn everything he knows in order to figure things out.

Poll: Will you see Chaos Walking?

A look at the Chaos Walking behind-the-scenes crew and production team. The film's director Doug Liman last directed American Made and The Wall. The film's writer Charlie Kaufman last wrote Anomalisa and Her.

Production: What we know about Chaos Walking

Film will go into production early 2017.

Chaos Walking Release Date: When is it coming out?

Chaos Walking is coming out in 2021 on Friday, January 22, 2021 (Nationwide release). There is 1 other movie coming out on the same date, including Everybody’s Talking About Jamie.

What is Chaos Walking rated?