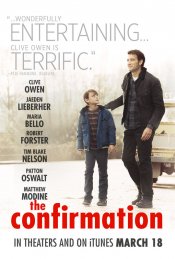 Follows eight-year-old Anthony (Lieberher) and his estranged father (Owen) spending two days together for the first time in forever, as the boy’s mom (Bello) and new husband (Modine) head off to a religious retreat. Their mutual unease is exacerbated when the father’s truck breaks down, his landlord locks him out of his house, and the toolbox that provides his living gets stolen. As they search for the stolen tools with help from an odd neighbor (Oswalt), the father and son begin to establish a connection.

Poll: Will you see The Confirmation?

A look at the The Confirmation behind-the-scenes crew and production team. The film's writer Bob Nelson last wrote Nebraska and Intimate Strangers.

Production: What we know about The Confirmation?

The Confirmation Release Date: When was the film released?

The Confirmation was released in 2016 on Friday, March 18, 2016 (Limited release). There were 13 other movies released on the same date, including The Divergent Series: Allegiant, The Bronze and Pee-Wee's Big Holiday.

Q&A Asked about The Confirmation

Looking for more information on The Confirmation?