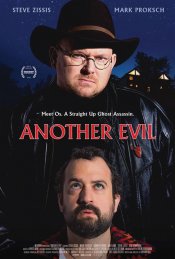 After encountering a ghost in his vacation home, terrified Dan Pappadakis (Steve Zissis) goes behind his wife’s back to hire an industrial grade exorcist – the bizarre and needy Os Bijourn. While implementing a variety of increasingly outlandish “ghost traps,” Os tries to befriend Dan almost as relentlessly as he tries to destroy the home’s “demons.” Dan considers calling the whole thing off, but it quickly becomes apparent that a great evil has embedded itself in his home, and that the fate of his entire family is at stake.

Poll: Will you see Another Evil?

Crew: Who's making Another Evil

A look at the Another Evil behind-the-scenes crew and production team. The film's director Carson Mell last directed The Phoenix Man.

Production: What we know about Another Evil

Another Evil Release Date: When was it released?

Another Evil was released in 2017 on Friday, May 5, 2017 (Limited release). There were 13 other movies released on the same date, including Guardians of the Galaxy Vol. 2, Handsome: A Netflix Mystery Movie and Take Me.

Questions: Asked About Another Evil

Looking for more information on Another Evil?