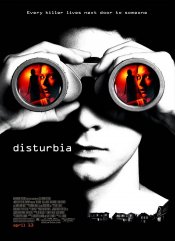 A teen living under house arrest becomes convinced his neighbor is a serial killer.

After his father's death, Kale Brecht (LaBeouf) becomes sullen, withdrawn, and troubled -- so much so that he finds himself under a court-ordered sentence of house arrest. His mother, Julie (Moss), works night and day to support herself and her son, only to be met with indifference and lethargy. The walls of his house begin to close in on Kale. He becomes a voyeur as his interests turn outside the windows of his suburban home towards those of his neighbors, one of which Kale begins to suspect is a serial killer. But, are his suspicions merely the product of cabin fever and his overactive imagination?

Poll: Will you see Disturbia?

Production: What we know about Disturbia

Disturbia Release Date: When was it released?

Disturbia was released in 2007 on Friday, April 13, 2007 (). There were 5 other movies released on the same date, including Year of the Dog, Perfect Stranger and Redline.

Looking for more information on Disturbia?