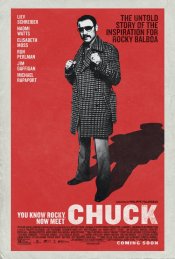 Poll: Will you see Chuck?

Production: What we know about Chuck

On or about December 21, 2015, the film was in Post-Production status.

Chuck Release Date: When was it released?

Chuck was released in 2017 on Friday, May 5, 2017 (Limited release). There were 13 other movies released on the same date, including Guardians of the Galaxy Vol. 2, This Is Not What I Expected and Like Crazy.

Looking for more information on Chuck?