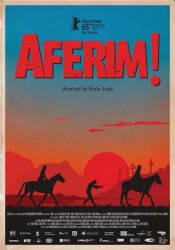 Eastern Europe, 1835. Two riders cross a barren landscape in the middle of Wallachia. They are the gendarme Costandin and his son. Together they are searching for a gypsy slave who has run away from his nobleman master and is suspected of having an affair with the noble's wife. While the unflappable Costandin comments on every situation with a cheery aphorism, his son takes a more contemplative view of the world. On their odyssey they encounter people of different nationalities and beliefs: Turks and Russians, Christians and Jews, Romanians and Hungarians. Each harbors prejudices against the others which have been passed down from generation to generation. And even when the slave Carfin is found, the adventure is far from over…

Poll: Will you see Aferim!?

A look at the Aferim! behind-the-scenes crew and production team.

Production: What we know about Aferim!?

Aferim! Release Date: When was the film released?

Aferim! was released in 2016 on Friday, January 22, 2016 (New York / Los Angeles release). There were 15 other movies released on the same date, including The 5th Wave, The Boy and Dirty Grandpa.

Looking for more information on Aferim!?