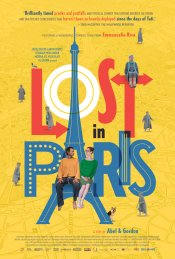 When Fiona’s (Gordon) orderly life is disrupted by a letter of distress from her 88-year-old Aunt Martha (delightfully portrayed by Academy Award®-nominee Emmanuelle Riva) who is living in Paris, Fiona hops on the first plane she can and arrives only to discover that Martha has disappeared. In an avalanche of spectacular disasters, she encounters Dom (Abel), the affable, but annoying tramp who just won’t leave her alone.

Poll: Will you see Lost in Paris?

Crew: Who's making Lost in Paris

Production: What we know about Lost in Paris

Lost in Paris Release Date: When was it released?

Lost in Paris was released in 2017 on Friday, June 16, 2017 (Limited release). There were 12 other movies released on the same date, including Cars 3, All Eyez On Me and Rough Night.

Questions: Asked About Lost in Paris

Looking for more information on Lost in Paris?